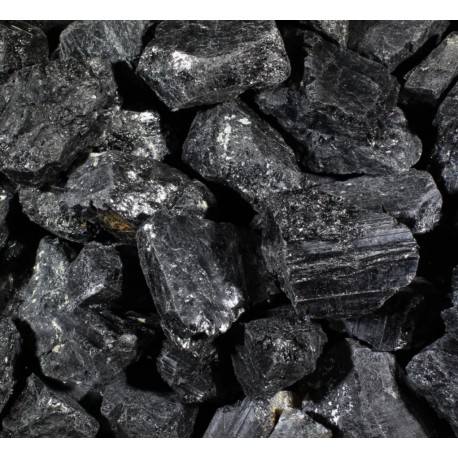 No reward points for this product.

• These stones are all natural in color and have been tumbled polished.
• The average size of these crystals are between 0.5 to 1 inches
• The photos are representative of the stones you will receive.

In addition to carrying the generic properties of Tourmaline, Black Tourmaline is the most effective blocker of curses, psychic attack, and ill-wishing. It protects against cellphone emanations, electromagnetic disturbance, radiation, and negative energies of all kinds. Wear around your neck or place between yourself and the source of electromagnetics. Place point out from the body, it draws off negative energy and clears blockages. Gridded around the house or open space, it affords protection on all levels. Connecting with the base chakra, Black Tourmaline grounds energy and increases physical vitality, dispersing tension and stress. Clearing negative thoughts, it promotes a laid-back attitude, encouraging objective neutrality with clear, rational thought processes. It also instills a positive attitude no matter what the circumstances and stimulates altruism and practical creativity.

Tourmaline comes from the Singhalese term turamali. This stone is piezoelectric, meaning that it generates electricity under pressure, and pyroelectric, generation electricity with heat. The Dutch called Tourmaline aschentrekker, "ash remover," as when heated it attracted ashes from a pipe. Tourmaline has a strong affinity with device energies and is extremely beneficial for plants, keeping pests at bay, and buried in soil, encourages growth of all crops.

Purifying and transforming dense energy into a lighter vibration, Tourmaline grounds spiritual energy; balances chakras, meridians, and auric bodies; and forms a protective shield. Traditionally used for scrying, it pointed to the culprit or cause in times of trouble, and indicated a "good" direction in which to move.

A powerful mental healer, balancing right and left hemispheres of the brain and transmuting negative thought patterns into positive ones, Tourmaline assists in understanding oneself and others, taking you deep into your inner being, promoting self-confidence, and diminishing fear. Banishing any feeling of victimization, it attracts inspiration, compassion, tolerance, and prosperity.

Source Material: The Encyclopedia of Crystals by Judy Hall and Supplier

Black Tourmaline, also known as Schorl, is a silicate mineral containing boron and a member of the Tourmaline family. It was first named in 1400 A.D. by a small village in Saxony, Germany after their village's original name, Schorl. Tourmalines of all kinds can be found on every continent however crystal forms of these stones are very rare and can be extremely expensive.

Tourmalines have been used and traded since ancient times, yet became a very popular fashion stone about 150 years ago. In 1876, George Kunz sold a Green Tourmaline originating in Maine to what is now known as Tiffany and Co. Before that, Tourmalines were used in the Mediterranean during ancient times. A statue of Alexander the Great, found and believed to be carved in India, confirms this. As of recently, the statue has been dated back to the second or third century B.C. Tourmalines of all colors can be electrically charged by rubbing your fingers on each end, resulting in the attraction of particles in the air.

Black Tourmaline is one of the most popular stones used in spiritual practices. It is most commonly used for protection and is recommended for anyone exposed to uncomfortable environments. This stone acts as a negativity deterrent by cleansing and protecting your auric field. The purification that Black Tourmaline provides is perfect for anyone struggling with anxiety, anger, and unwanted thoughts. This stone will also act as a transmuter taking the negative energy surrounding you and purifying it.

We are commonly asked about stones to place in the work environment to deter negative coworkers or clients. Look no further as Black Tourmaline is the best stone for the job. In addition, Black Tourmaline has positive effects on the body by balancing and activating the left and right side of the brain. This results in the detoxification of impurities in the body. If you create a wand with Selenite and Rose Quartz this will produce even better results.

Disclaimer
We recommend consulting with your health professional when concerned about a health-related issue.

This item has not been evaluated by the Food & Drug Administration and makes no claims to cure any illness, disease, or ailment.