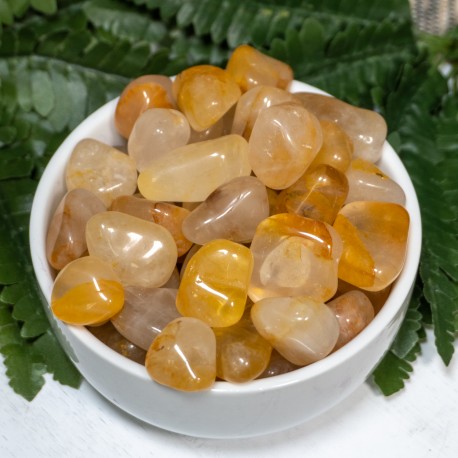 Golden Healer has a very high vibration. It is a type of Quartz with iron inclusions. This stone resonates with our solar plexus, sacral, and root chakra creating a trifecta for manifestation and grounding.

No reward points for this product because there's already a discount.

Note: Pictures are representational stock photos from the supplier.

Golden Healer has a very high vibration. It is a type of Quartz with iron inclusions. This stone resonates with our solar plexus, sacral, and root chakra creating a trifecta for manifestation and grounding.

Quartz is an igneous rock composed of oxygen and silicon atoms that crystallizes around magma or hydrothermal vents. It is the most abundant mineral on planet earth and can be found in the form of points, masses, grains, prisms, and even threaded. This mineral is also one of the very few on earth that can appear in a twinning structure (Japan Law Quartz). Quartz was first recorded in 300 B.C. by Theophrastus and was given the name κρύσταλλος or kristallos. The origin comes from the word “ice” signifying the ancient belief that Quartz was encapsulated in ice. Nicolas Steno discovered in the 17th century that no matter the size or shape, Quartz will always meet at a 60 degree angle. It can be found in every country on earth with important commercial deposits appearing in Brazil, China, South Africa, Madagascar, Australia, Canada, the United States, Mexico, the United Kingdom, and Russia.

A master healer with high concentrations of the universal life force or Qi, Golden Healers have an exceedingly high vibration, bringing pure consciousness to the earth to expand awareness. Golden Healer carries bioscalar waves that effect healing on multidimensional and intercellular levels. It rapidly releases ancient emotional conditioning from the solar plexus. The coloring comes from iron, and this stone facilitates making profound changes in your life with minimum effort.

Disclaimer
We recommend consulting with your health professional when concerned about a health-related issue.

This item has not been evaluated by the Food & Drug Administration and makes no claims to cure any illness, disease, or ailment.